How do you deal with favoritism or nepotism in the workplace?

Imagine, getting passed over for a promotion because your boss’s buddy who barely shows up to work got the job.

However, you can combat favoritism in the workplace.

Luckily for you, I’ll show you how to deal with favoritism or nepotism. I’ll show you the signs to look for, what you can do about it, and if it’s even legal. You’ll be well on your way to becoming the favorite employee yourself. 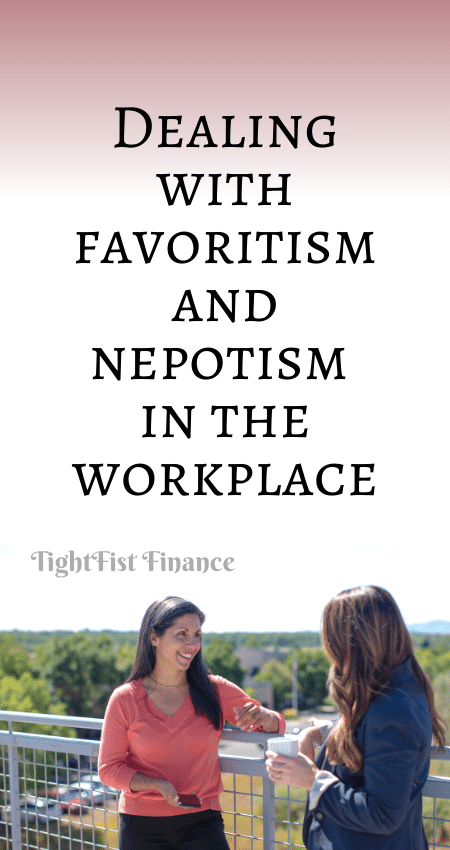 Let’s define favoritism in the workplace

For example, your coworker may be very good at problem solving for your group. The boss has confidence that important projects are going to be done right and on time. Your boss is recognizing your coworker’s skill and utilizing their talent effectively.

An unconscious bias is when your boss doesn’t recognize they’re giving preferential treatment. Typically, favoritism becomes a problem when the favoritism isn’t recognized by the boss.

For example, your coworker and boss are constantly talking about fantasy football. They share a common interest and have become really good friends. Your coworker gets a promotion, even if they aren’t the best of workers.

You should try and identify if your boss has a conscious or unconscious bias. Does the favorite coworker perform well or are they just really good friends with your boss?

Can anything be done about favoritism in the workplace?

Do not approach your boss about their favoritism. Instead, focus on creating a better personal and work relationship with your boss, outperforming your peers, and asking for similar opportunities. You can network with people from your company and other companies to create a better opportunity for yourself.

Keep in mind, you never want to directly approach your boss about favoritism. Approaching your boss can be an awkward conversation that only causes you to become the least favorite.

You should try to become your boss’s favorite. Anything you can do to make your boss’s job easier and develop a strong personal relationship.

For example, you should take on challenging assignments that your boss needs help with. You increase your visibility as a hard worker. Your boss can now depend on you to get work done correctly and on time.

You should try and talk to your boss about something non-work related on a regular basis. Try to find common ground. People love to talk about themselves, so you want to give your boss the opportunity to do so with you.

Remember, nobody cares as much about your career as you do. You should do your best to network within and outside your company. Doing so can lead to future job opportunities where the work environment is better and you might get a pay increase.

What are the signs of favoritism at work?

Signs of favoritism at work include giving preferential treatment, assignments, promotions, time off, or work hours. Look for close relationships, praise, flirty or unprofessional behavior, or special accommodations that are not available to anyone else.

Is favoritism a form of harassment?

Favoritism itself isn’t considered a form of harassment, but it can be considered harassment depending on the reason for favoritism. You may be entitled to legal action if you experience negative effects of favoritism in the workplace, such as, different treatment due to race, age, or sex.

What can you do about nepotism in the workplace?

Investigating favoritism in the workplace is very similar to dealing with nepotism. You can become a high performer and try to get a good working relationship with your boss. Your company’s HR may have anti-nepotism policies in place or provide channels to report nepotism.

How do you prove nepotism at work?

Proving nepotism at work can be difficult, especially if one of the family members is a higher up manager. Look for signs, such as quick or undeserved promotions, having fewer responsibilities, or treatment that isn’t consistent across all employees. In most nepotism cases, family members are able to easily skirt around rules that apply to all employees.

How do you counteract nepotism?

For example, some companies do not let family members be in the management chain of other family members. Therefore, if a husband and wife worked for the same boss, they could not become the boss of that group if the position opened up.

How to report nepotism in the workplace?

To report instances of nepotism, collect an example of how nepotism created an unfair advantage or situation. Contact your Human Resource department or use your company’s anti-nepotism policy.

Can you sue an employer for nepotism?

You may be able to sue your employer for nepotism if different treatment results in descrimination. Discrimination cases typically arise in differential treatment due to race, age, or sex.

Summary: Dealing with favoritism and nepotism in the workplace

As you can see, it can be difficult to deal with favoritism or nepotism in the workplace. Favoritism and nepotism isn’t necessarily harassment, but it may be descrimination if it causes unfair treatment due to race, age, or sex.

To combat favoritism, try to become your boss’s best friend at work and on a personal level. Outperform your peers to become a valuable employee and ask for similar opportunities as the favorite worker. Network with people in and outside of your company for potential job opportunities.

Do not try to confront your boss about nepotism or favoritism. Confrontation typically has the opposite effect, making your boss go on the defensive.

Signs of favoritism at work include giving preferential treatment, assignments, promotions, time off, or work hours. Look for close relationships, praise, flirty or unprofessional behavior, or special accommodations that are not available to anyone else.

Nepotism is extremely difficult to combat, especially because it’s not necessarily illegal. However, your company may have anti-nepotism policies in place. Contact your human resource department to report nepotism and unfair treatment.