What do you need to know about using a debit card abroad to pay in local currency?

You’re on vacation in the Mexican Riviera or catching the sights and sounds of Paris, France. The last thing you want to do is pay more for meals and souvenirs while on your trip. But using a debit card abroad can present some challenges.

After you swipe or enter your debit card, you should always have the choice of paying in local currency. If you do not see this option, ask the merchant to void the sale and start over. Let’s look at some reasons choosing local currency is to your advantage. 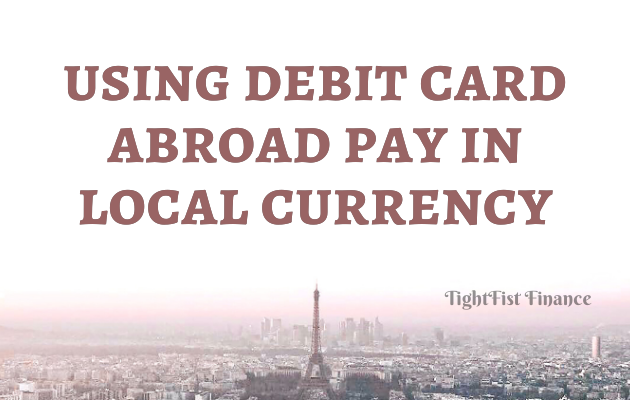 Using a Debit Card to Pay in Local Currency

You can use a U.S. debit card to pay for goods and services in another country’s currency. All you have to do is present your card and choose the local currency option. Retail and restaurant staff should either ask you, or a POS system should give you a choice.

Reasons to Choose to Pay in Local Currency

Here are the main reasons you’ll want to choose local currency rather than USD conversion options while traveling abroad.

Converting to U.S. dollars at the point of sale can cost you, literally. You’ll often pay a premium to convert foreign transactions to U.S. dollars. Instead of a 1% or 2% difference, you might pay as much as 12%.

This is because card issuers have more cost-effective agreements and negotiation ability. You’ll get a more favorable exchange rate when the conversion happens after the fact. Otherwise, you are subject to whatever exchange rate markups businesses charge.

Let’s say you’re on a grand tour that spans multiple countries. This won’t be as much of an issue in the European Union, where businesses accept a single currency. However, cruises and other trips where you visit different countries can get hairy.

By always choosing to pay in the local currency, you’ll leverage the current value of the U.S. dollar. You also won’t be paying higher conversion fees with one merchant and lower transaction costs at another. Your card issuer can streamline exchange rates and charges.

Since your exchange rates will nearly match going market rates, you’ll experience less confusion. You can easily look up the value of the U.S. dollar to a country’s local currency online. You’ll get a better sense of how much to budget from your account by doing this.

Always choosing local currency is also less confusing for your bank. If they see they have to convert some transactions and not others, the chance for errors increases. Better to stick with one method and have it work in your favor.

There are several advantages to choosing to pay in local currency. One of the most significant pros is that you’ll usually pay less. You’ll avoid conversion fees and premiums, often much higher than negotiated exchange rates.

Based on this article, we think you’ll enjoy the following: