VOO vs SPY: Which S&P 500 ETF is better and what is the difference?

Regardless, both exchange traded funds are very well priced. It won’t matter much if you invest in one ETF over the other.

However, if you’re looking for the best deal then VOO’s your fund.

Luckily for you, I’m going to show you the difference between VOO and SPY. I’ll break down your investing options, so you can make the best choice. 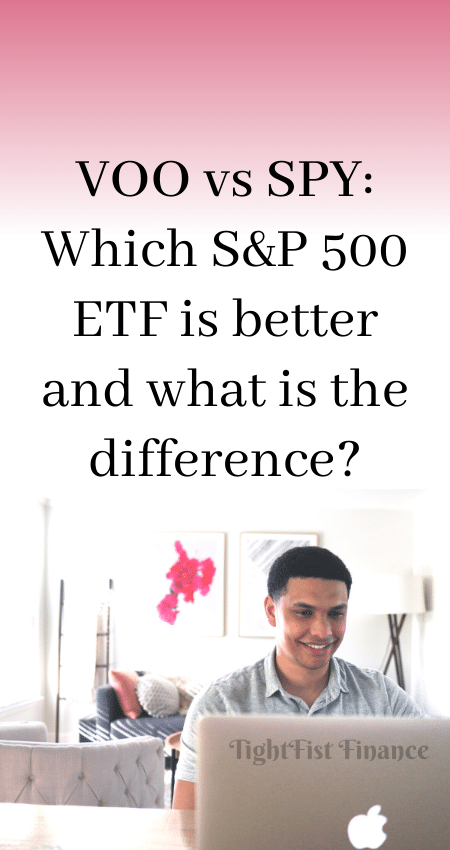 This article may contain affiliate links which pays a commission and supports this blog. Thank you for your support!

What is VOO and SPY?

Both VOO and SPY track or attempt to copy the S&P 500’s performance. Therefore, when you buy VOO or SPY, you’re essentially investing in the S&P 500.

So why wouldn’t you just invest in the S&P 500? Why do you need a fund like VOO or SPY?

What is the difference between VOO and SPY?

VOO and SPY are essentially the same ETF, but VOO has a cheaper expense ratio. VOO’s expense ratio is only 0.03% while SPY is 0.0945%. Therefore, performance between VOO and SPY is the same, but SPY will cost investors more in the long run.

Using Dividend Channel’s Dividend Reinvestment Calculator, we can compare the performance of VOO vs SPY.

As you can see, the performance of both funds are similar. Over the 10-year time frame I’ve selected, both funds had annualized returns of 13.54%.

However, this calculator does not account for the fees you’ll pay. Each fund charges an expense ratio which is an annual fee charged by the account manager. Because you’re paying more for SPY, you’ll actually have less money than if you had invested in VOO.

Using an expense ratio calculator, we can estimate the fees paid.

Therefore, investing in SPY was three times more expensive over this time frame.

However, the cost for either isn’t horrible. Some S&P 500 index funds charge over 1%, which would result in fees over $3k for this example.

The main point is that you’re getting the same product with VOO or SPY. SPY just costs a bit more. Essentially, it’s like finding an item at target for $5 at Target, but Walmart sells it for $4.95.

Which is better? VOO or SPY

VOO is better than SPY because it is cheaper to hold. Both VOO and SPY are reasonably priced and perform similarly. Given the choice, investors may lean towards VOO for the slight cost savings.

As you can see, VOO and SPY are both S&P 500 index funds with similar performance. VOO is offered by Vanguard while SPY is offered by State Street Global Advisors. The only difference between the two is cost, which VOO is slightly cheaper.

Because of the cost savings, VOO is the better ETF. However, the expense ratios on both funds are considered inexpensive. Therefore, you shouldn’t panic if you happened to buy SPY over VOO.

Both are great funds. If I wanted to invest in an S&P 500 index fund, I would choose VOO.