What should you do if your bank account is overdrawn and you have no money?

Bank accounts that are overdrawn should be returned to a positive balance as soon as possible. Stop future transactions and contact merchants trying to process transactions to avoid further or second overdraws. You should also contact your bank to see if they would be willing to waive any overdraft fees.

Imagine the feeling of seeing a negative bank account balance. You accidentally charged too much money and you have no money to pay it back.

You can minimize the impact of an overdrawn account.

Luckily for you, I’ll show you what to do if you’ve overdrawn your account. I’ll show you how to get your account back in good standing and if you have any potential legal issues. In most cases, the sooner you can get a positive balance, the better. 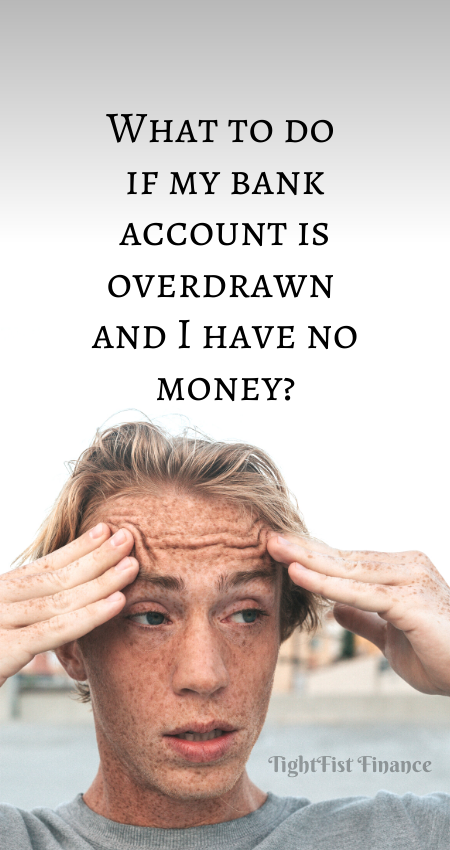 Can you overdraft if you have no money?

In most cases, you will be able to overdraft on your bank account, even if you have no money. Your bank account will show up as insufficient funds and you may be charged a penalty fee or interest. You are expected to pay back all overdraft amounts and fees. Specific bank accounts may come with overdraft protection, reducing your risk of overdrafting.

You should avoid willingly overdrafting your bank account. Some individuals purposefully overdraft in order to take a short-term loan (e.g. making it to payday). However, your bank may have better short-term credit lending policies in place.

Some banks may allow agreed upon overdraft amounts. You will have to pay the overdraft back, but fees and interest rates may apply. Interest rates on overdrafts are typically very high and should be avoided.

You can typically find your bank’s overdraft policy by performing a Google Search for ‘your bank overdraft.’

For example, searching for Bank of America’s overdraft policy, they refer you to a Personal Schedule of Fees. The ability to overdraft or your overdraft penalties will depend on the type of account you have.

The Bank of America Advantage SafeBalance Banking Account does not allow you to overdraft, so there are no overdraft fees. However, you may be charged a fee by the merchant if you overdraft.

Other bank accounts may assess a fee or penalty if you overdraft.

What happens if my bank account is negative and I don’t pay it?

Overdrafts on bank accounts will typically impact credit scores, result in account closure, or your funds seized. You are taking on debt when you overdraft because the bank has financially covered the cost of your transaction. In some cases, the bank may decide to pursue legal action for unpaid balances or send the account to collections.

Can you go to jail for overdrawn bank account?

Going to jail for an overdrawn bank account is unlikely, but not impossible. Not paying your debt back to a financial institution may result in legal consequences. These legal consequences may include jail time, but are more common for illegal activities, such as fraud.

Most banks will allow your account to be overdrawn for 45 to 60 days. Consult your bank’s overdraft policy for specific guidance.

What happens if you can’t pay back overdraft?

In most cases, the bank may either seize funds to pay back the overdraft. However, bank accounts with insufficient funds may be closed and the account sent to collections.

What to do if my bank account is overdrawn and I have no money?

The most important part of resolving an overdrawn bank account is to return to a positive balance as soon as possible. Stop autopays which may further reduce your balance and see if your bank can waive the overdraft fee. Contact the merchant where you spent your money to prevent them from processing the transaction.

You will run into minimal issues if you can get your bank account balance back to a positive balance ASAP. Transfer money to your account, borrow from a friend or relative, sell something, or seek a charitable donation.

If this is your first overdraft and your account is normally in good standing then you may be able to get the fee waived. Stop by your bank or call your bank’s customer service number to see if they can remove the fee.

Lastly, you want to contact the merchant which is trying to process a transaction. You want to avoid bringing your balance back to a positive, only to have the merchant run another transaction. This transaction may cause you to go into another overdraft situation if you don’t have sufficient funds.

As you can see, your bank may allow you to overdraft on your account with or without penalty. Some banks have overdraft protection in place to help you avoid fees. However, you are responsible for paying back all overdrafts and fees.

Overdrafts have several consequences. Your credit score may be impacted, funds seized, or bank account closed. In some cases, you may be subject to legal action or sent to collections.

Get your account back to a positive balance as soon as you overdraw. Contact your bank to see if they will waive your overdraft fees. Contact the merchant and stop autopays to avoid transactions that may result in another overdraft situation.